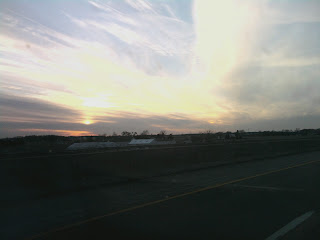 I don't know if you can see it or not but there is a rainbow along the sunset - beautiful! We are almost home, about an hour to go.
Posted by Life is Sew Crazy! at 2:01 PM No comments: 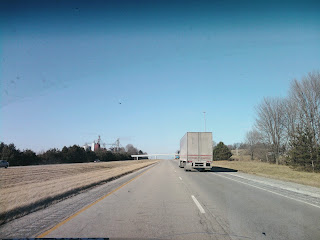 We are on our way back to Michigan, traveling through the most boring state ever... Ohio.
Posted by Life is Sew Crazy! at 11:32 AM No comments:

God must have made that. He's a pretty silly man!

My daughters say the funniest things.  Today was no different.  We were visiting a friend today and my youngest, who just turned three, saw the glass doors in the bathroom instead of a shower curtain and this is what went through her little brain:

'What is that?' as she points to the shower doors.

'God must have made that. she says...

'Maybe it was the person who built the house.' I offered.

'No, God made it - he's a pretty silly man!' she exclaims

So for those of you who were wondering where glass shower doors come from, now you know.

We had a great day visiting friends (long overdue) and watching the Steelers game.  Well, I tried to watch it, but it's pretty difficult with two kids in a foreign house that's kid-free.  I felt like I was watching their every move, waiting for them to break something or ruin something.  Then came the whining/crying because nap time was overdue and I felt like we were ruining the gathering.. of course once the girls settled down and fell asleep my friends said they missed the excitement that they brought.. they were entertaining.  Their entertainment is my headache, go figure :).  Seriously though they girls were pretty well behaved for spending almost 5 hours with a room full of adults.


After that we went out to have our final Christmas Dinner with my grandfather.  The girls had a fabulous time with their cousins, aunt, uncle, pap, and grandma's.  I think poor grandma Vicki took a pretty bad beating from three energetic pre-school aged kids.  She was rolling around on the floor playing with them, being their horse, tickling, etc...  But that's what grandma's are for, right?  The kids were spoiled again and I can confidently say that they couldn't possibly want or need anything for the rest of the year.  No matter how much we say 'save your money.. don't go crazy.. they don't need presents'  my pleads are overruled by loving family who rarely get to see them so in turn they shower them with gifts.  I guess we'll save the 'be grateful for what you have' speech for later and let them enjoy being spoiled for a little while...

Well...  I think it's time to wrap this up.  We're going to be on the long road back to Michigan again tomorrow and there's lots to do to pack up and head home.  Can't Vacation last forever?

I'll leave you with the birthday girl... 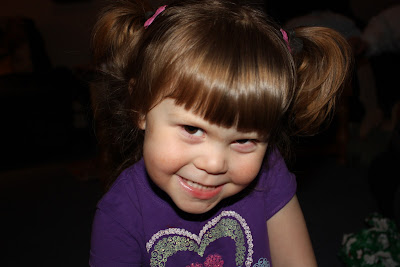 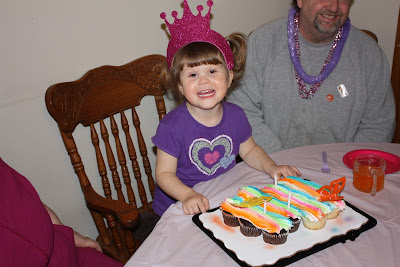 It's easy to remember the bad things that happen, which is why I like to take pictures of the good things!  Here's a picture for each month of 2010 and what I love about each one. 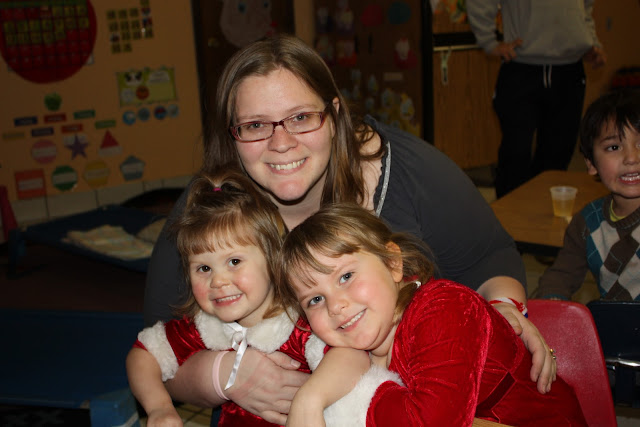 This is my favorite Photo from December for a number of reasons.  First, I'm RARELY in a picture.  Second, I usually hate the pictures that I'm in.  Most of all though, I'm in a picture with two beautiful little girls who are HAPPY and I'm visiting them at school - that's what I love most about this picture. 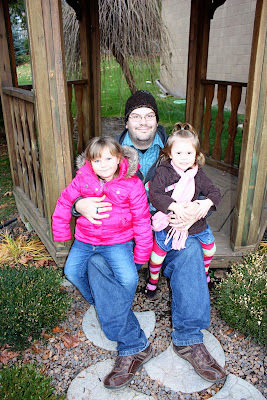 In November we celebrated Nick's birthday in our happy place, Frankenmuth.  Seriously, we should live there...  we're much nicer people when we're there.  I love the tights N is wearing in this picture, love that Nick is wearing a wool hat that I knit for him and that this was taken outside of the wool store, but most of all I love that the three people that I love more than anything in this world are all bundled up in the same pretty picture. 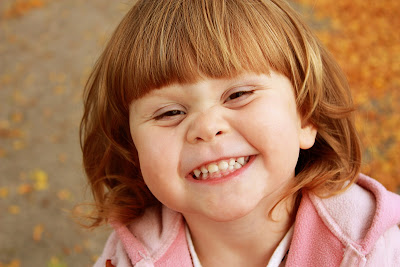 This picture was taken on a beautiful day in October.  I love the fabulous fall colors in the picture, I love that I managed to snap this picture as we were hopping along the sidewalk on the way to the park, and I love that beautiful smile on my sweet little girl! 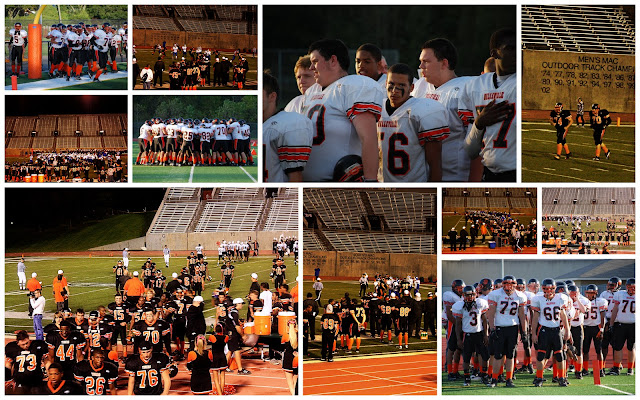 September was filled with nothing other than Friday Night Lights as we watched my brother in law play his final year of high school football.  When I say play, I mean we watched him watch the other guys play but you know what I mean.  He didn't get much playtime but he still loves football and we had a fun time cheering him on! 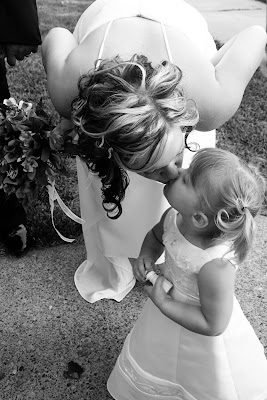 In August I photographed my first wedding.  More importantly it was my Uncle's wedding and he happened to be marrying the best thing that ever happened to him.  This is the bride kissing their sweet little girl. 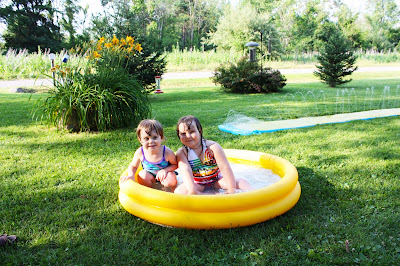 July is always fun with summer picnic's, parties, and Independence Day celebrations.  What better childhood memory to capture than the slip-n-slide next to sisters in the kiddie pool?  You know that day was fun! 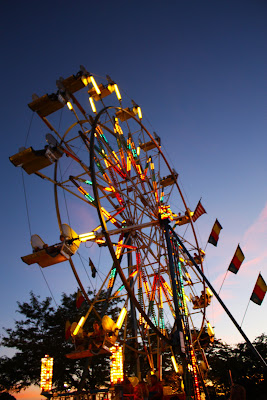 The Strawberry Festival is in June each year on Father's Day Weekend.  This year was great because both girls were able to ride the rides and they had a blast.  Daddy takes them on the Ferris Wheel because I'm terrified of them, but they sure are pretty! 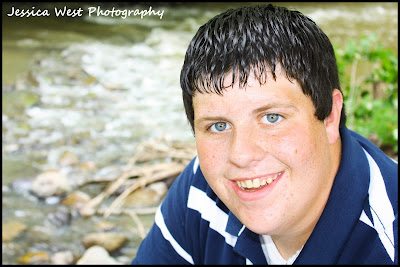 May was pretty uneventful, I think I was still getting used to my camera at that point, but we did start talking about having me take my brother-in-law's senior pictures.  They didn't end up happening until July but I spent a couple of months looking at poses, learning my camera, and thinking about locations.  This is my favorite picture from the set. April was my birthday, and Nick got me my first DSLR (I don't know how I lived without it.)  It was also my oldest daughter's very first dance recital.  She was in the hip-hop class and they danced to 'You Can't Touch This'.  It was cute, but she and her sister decided to take Ballet this time around so that they can have pretty ballerina costumes like this friend.

In March this little girl turned 4!  As the snow was melting on the ground we started walking regularly to give this girl time to master her biking skills.  I love the colors in this and the retro look to it.  I also love that it's rough and dirty, not clean and sparkly - kids don't have fun when they're clean and sparkly!

I think we were going a little stir crazy in February, waiting for spring.  We had a few princess parties and had fun taking pictures of silly faces!

Oh my baby girl who had just turned 2 in this photo, holding one of my favorite Dr. Seuss books last January...  *sniff*  she's grown so much over the past year!
Posted by Life is Sew Crazy! at 9:48 PM No comments: 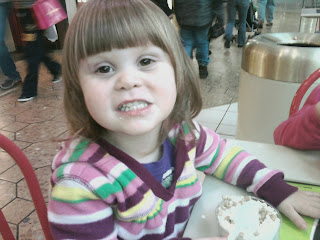 Test blog from my phone with a bonus picture of my little sweetheart trying her first cup of Dippin' Dots. THE ICE CREAM OF THE FUTURE!
Posted by Life is Sew Crazy! at 8:38 PM No comments:

A new decade, a new year, an old blog. 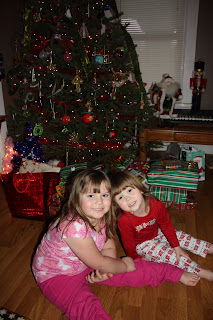 Well hello again, it's been a while.

My husband had to work so we spent Christmas at home. It was nice being able to wake up and let the kids run downstairs to see what 'Santa' brought them. Their little hearts were just filled with excitement, my oldest even started talking to herself at one point, holding her chest, telling herself to calm down. *squee* That's the moment that parents wait for at Christmas time.

Santa was good to them too. They were very specific this year. They asked for Purple Unicorn Pillowpets

, and a Doctor Set

. Santa can live up to those expectations!

If you really want to see excited though, we'd need to look back to a few days prior. We took our annual trip to the 'North Pole'. For some reason the girls got it in their head that the local Lightfest is the North Pole. We probably put that in their heads being silly at some point, but they believe it and it always seems to work in our favor. The drive isn't that far but we usually go late at night so it's dark and they don't know where we're going. The line is long so they typically fall asleep until just before we enter the gates, and you drive through all of the lights to the end where Santa is. They get to go in and talk to Santa in their PJ's, get a pic and drop of their letters in the mailbox. It's good family fun, but back to my original point - this is what excited looks like according to my 4.5 year old: 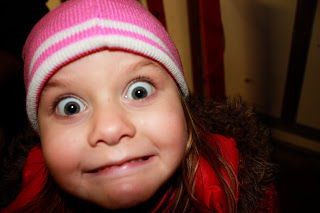 Don't you wish you were 4 again?
Or maybe you want to be a 3 year old mommy? 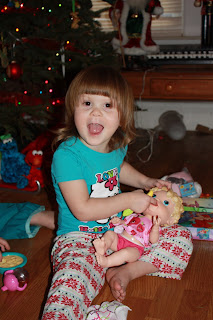 Yes, that's right. My baby just turned 3 on New Year's Eve. I can honestly say that I have no idea what happened to the last three years. It feels like I was holding this sweet little baby in my arms yesterday and now all of a sudden I have a preschooler. The sweetest, smartest preschooler that I know. She amazes me each and every day. She came home the first week of school and signed the letter 'B' and said she wanted to take Barney as her letter B item for show and tell. All throughout the Holiday Season she's had us in good spirits with her constant caroling, and best of all she smothers me regularly with her awesome hugs!

We're in Pennsylvania visiting family for the New Year so we celebrated her birthday with cupcakes and ice cream and we'll do it all over again once we're back in Michigan. She's cute, so we let her slide like that.. having two birthdays.

Pretty soon though it'll be back to Michigan, back to work, back to school, back to the realities of life. 2010 brought sickness, heartache, family drama, a financial crisis, difficult jobs, too much stress, too much mess and I'm glad that we're putting that all behind us. 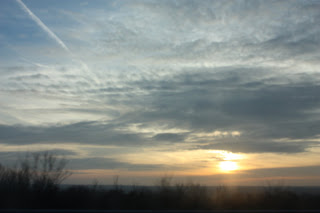 After all a few good things did come out of 2010 that will pave our path in 2011 like the Church and Church family that we've become a part of. It has been our saving grace, literally. We were both saved and baptized at CrossPointe in 2010, and we're definitely looking forward to the exciting things to come at CrossPointe in 2011. We also found an amazing school that the girls are going to. N is in the Preschool 3's and K is in the Pre-K class and they love it! We couldn't have found a better school!

Happy New Year everyone!
Posted by Life is Sew Crazy! at 6:13 PM No comments:

You are the Sunshine of my Life 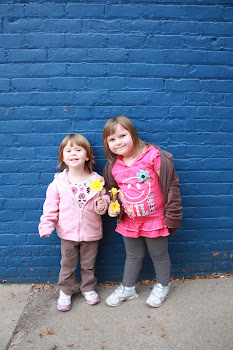